Yoko M Tank (ヨーコMタンク, Yōko M Tanku, Yoko M Tank?), a Dayakkaiser-type gunmen, is Yoko's personal Gunmen made by Leeron by modifing a Dayakkaiser except pink with Yoko's skull hair accessory painted on it's head. It is armed with a smaller barrel cannon compared to Dayakkaiaer.  It debuts in Childhood's End to help in the destruction of the Doten Kaizan. It makes a reappearance in the second movie The Lights in the Sky are Stars as Yoko's mecha to spring Simon from Lincarne Prison. According to the director, the "M" of Yoko M Tank stands for "milk".

It reappears shortly at the beginning of  "The Lights in the Sky are Stars". It was engaged in a fierce battle with the beastman and the human army with King Kittan in the capture of Teppelin. Afterwards it is equipped with a bullet spin barrier with spiral power, then it becomes the cockpit of "Space Yoko W Tank".

Appeared in "Lagann-Hen". It was stored in the supercluster of Dai-Gurren. Yoko controls it in Yoko M ​​tank. It's armed with a pair of cannons on its head as opposed to one, and obtains a Tengen Toppa form (named Tengen Toppa Yoko W Tank) just like the other Team Dai-Gurren Gunmen. 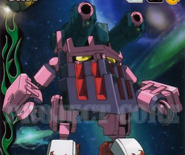