Tengen Toppa Enki Durga draws its design from Viral's original Gunmen, Enki, being a predominantly white humanoid Gunmen. It has fourteen arms, a four-eyed face on its chest, and a spiky golden crest on its helmet. It is the second Tengen Toppa Gunmen to appear after the Granzeboma destroys Tengen Toppa Gurren Lagann.

Tengen Toppa Enki Durga has seven sets of arms, a nod to the increased number of arms that Viral's mech Enki had when it became Enkidudu (and, in the Drama CD Otoko Ippiki Gurren Lagann, Enkidududu and Enkidudududu). Each limb has impressive strength, being able to hold back one of the Granzeboma's drill tentacles. It attacks using several blackened blades, one for each hand on the mecha except for the front two. One of the weapons is a kanabō, a club typically used by Japanese demons, and by Gozu, the first Gunmen faced by the Simon, Kamina, and Yoko. 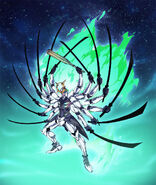