Tengen Toppa Dai-Gurren draws its designs from a combination of the Dai-Gurren and Super Galaxy Dai-Gurren, even toating its own Team Dai-Gurren flag made completely out of Spiral Power. It is the tenth and final Tengen Toppa Gunmen to appear after the Granzeboma destroys Tengen Toppa Gurren Lagann.

Tengen Toppa Dai-Gurren runs on the Tengen Toppa Spiral Engine, and carries the original Dai-Gurren's prow like a sword. It has several armaments, including Leeron's Probability Alteration Missiles and two Dimensional Anchors.

Probability Alteration Missiles: Leeron claims these missiles can block the Anti-Spiral's ability to change probability in the Super Spiral Space.

Super Dimensional Anchor: Two drill-shaped anchors that are used to seal the Granzeboma in the space with Team Super Galaxy Dai-Gurren.

"I've Got The Best Wife In The Universe" Swing: Named by Dayakka, the Tengen Toppa Dai-Gurren uses its Super Dimensional Anchor to swing Granzeboma around and slam them into a galaxy. 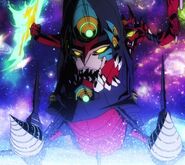