Mugann (from 無顔, meaning "faceless") are virtual weapons designed by the Anti-Spirals as part of their initial strike against races capable of Spiral Power. When the Spiral-capable population on a planet reaches a critical point, the Mugann are summoned by an awakened Messenger to eliminate the species - or, failing that, to distract them from the Anti-Spirals' other measures of extermination.

There are three types of Mugann that appeared in the series:

All Mugann have almost impenetrable energy shields which can deflect bullets and other solid weaponry, as well as powerful lasers that can destroy anything they touch. However, their capabilities are not enough to stand up to the Gurren-Lagann, which managed to defend against their attacks and drill through the mecha during its initial appearance with the Giga Drill Break. However, unlike normal Gunmen that simply explode or break-down when dealt a fatal blow, these mecha turn into small explosives that devastate anything nearby, causing almost as much damage as the Mugann itself can cause. This is a result of the mecha's unstable molecular structure, which also enables it to easily teleport itself through long distances.

A technique created by Simon to effectively defeat the Mugann without causing damage is by harnessing their lasers' power using the Gurren-Lagann and delivering it back to them all at once, destroying their body, and then shooting down every single explosive they left with the Grapearl force's handguns before they fall to the ground. However, it's also known that this measure could be troublesome against larger numbers of Mugann. Later, Leeron creates a technique where Grapearls can both penetrate the Mugann defenses and create a shield around it, meaning the Mugann can both be destroyed and have its small bombs rendered harmless. Once the battle moved into space, the Mugann's explosives were rendered moot, as there was little to nothing for them to destroy and Team Dai-Gurren was able to endure the explosions or detonate them from a safe distance.

Role in the series

When the human population on Earth reached one million, Nia awoke as a Messenger and initiated the Human Extermination Program by mentally materializing strange mechanical entities out of thin air. After the first one appeared, these mecha were codenamed "Mugann" by the human forces, because they lacked the faces that characterized Gunmen and (to a lesser extent) Grapearls.

In addition to assaulting Kamina City, a large force of Mugann was deployed in space around Earth, waiting to ambush the humans when they attempted to evacuate in the Arc-Gurren to avoid the devastation of the planet when the moon collided with it. However, the ambush was thwarted by Gurren Lagann, which handily destroyed the bulk of the Soldiers before combining with the Arc-Gurren and destroying the Great Cage Mugann's combined form.

When Nia was recalled, the Mugann stopped attacking Kamina City. 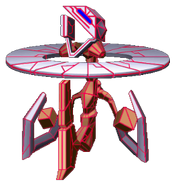 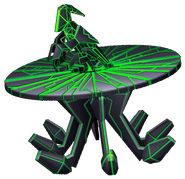