Mechs are the main form of transportation and combat in the Gurren Lagann series.

Gunmen are the main type of mecha used in the anime series Tengen Toppa Gurren Lagann. The name itself means "face/facade"(顔面 ガンメン Face Surface), and can be broken down into "gun" and "man" — unsurprisingly, the mecha themselves are centered around faces and as such are very varied with few in the series being the same model. Gunmen sport a variety of weaponry: primitive models only use large clubs or bare hands, while advanced ones use solid or beam weaponry. Gunmen are powered by their human pilots' Spiral Power (fighting spirit), or by electricity when piloted by a Beastman.

The code name "gunmen" was applied to the system originally known as "system that shares the mutually-expanded awareness through the joint-developed man-machine interface."[1] The face area of gunmen is laid out like a series of cranial cortices, mimicking the brain functions. Information is directly shared with the pilot's brain, displayed from a central monitor via highly-specialized symbols. The pilot controls the Gunmen through the use of control sticks that directly send neural signals to the mecha itself. In this way, the pilot can receive advanced sensory information regarding the battlefield and control the Gunmen's movements as easily as they would control their own bodies.

The original purpose of the Gunmen was in lunar resource exploration, but were repurposed to battle the Anti-Spirals, the main antagonistic force of the series. Lordgenome developed them about 1,000 years before the events in the series on a very large scale, with enormous Gunmen (called Dai-Guns) like the Dai-Gunzan and Arc-Gurren being much more commonplace than the smaller models seen through most of the series. Gunmen were also designed for space combat, so no further modifications were necessary when Team Dai-Gurren was launched with their Gunmen into the Earth's satellite orbit to fight the Anti-Spirals.

The Anti-Spiral conflict also led to the production of a much larger variety of Gunmen, referred to as "Space Gunmen" and based on the template of the Arc-Gurren Lagann. Space Gunmen are piloted by a smaller Gunmen inside, using a cascade interface to connect to the pilot. They tend to resemble their "pilots", with similar weaponry, designs, and general capabilities, albeit scaled up to a much larger size.

After the events of the series, there are very few Gunman are left in existence aside from Gurren Lagann and the Super Galaxy Dai-Gurren, with the large bulk of Earth's military being made up of Grapearls.

The first Gunmen Simon and Kamina encounter. It crashes into their village and attacks Kamina after he antagonizes it. The mecha loses sight of Kamina, Simon and newcomer Yoko Littner, who pursues it and attacks. Simon then pilots the Lagann against the Gunman, ending in its destruction. This model is likely a generic one, since other gunman that appear like this one appear throughout the series.

Appearing in Episode 4, this Gunmen tried to defeat Team Gurren while Kamina was still trying to teach Simon to combine stylishly, refusing to do so unless he did it right. It is one of the few Beastmen Gunmen with the ability to combine; it is actually made of 16 individual Gunman units merged together to create one stronger one. Each individual is piloted by a pink-furred, puffball Beastman, and is capable of spinning rapidly to attack with its entire body. The larger Gunman can launch its limbs like missiles, and easily separates and recombines its parts. A mixture of Kamina's refusals to combine and Team Gurren's hunger prolonged this battle, but the battle was ended quickly once Gurren-Lagann was on the scene with well fed pilots.

This massive Gunmen appeared in Episode 6, masquerading as a hot spring resort in a dense fog. It captured humans by sending out pink rabbit-like Gunmen, which would lure potentially threatening targets to the "hot springs". In its disguised state, the Beastmen pilots (a black fox, and several kappa and rabbit attendants) masqueraded as staff, providing travellers with food and relaxation before trapping them in cages.

When Kamina and Simon caught on, the owner transformed both herself and the Gunmen. Depite surprising Team Gurren with her nocturnal assault, and trying to steal Gurren before it could be activated, the captured girls of Team Gurren were freed and Rossiu foiled theft by piloting Gurren himself. After this, Kamina quickly defeated the Gunmen with the "Man's Wrath Explosion Slash".

Unlike most Beastmen Gunmen, the Hot Spring Gunmen and its hare-like allies were able to act at night. This appears to be because the main unit has an electrical power source (which only detaches when it transforms to attack), and presumably some method of powering the smaller Gunmen. It might also be a miniaturized Dai-Gun Type.

An unique Gunmen appearing only in Parallel Works 2, resembling a massive green pachinko machine with arms and legs. It appears entirely passive, simply waiting for someone to turn the knob on its side to play a round of Pachinko, and it doesn't even seem to have a pilot. Nonetheless, it is at least self-aware, being able to turn and give Viral's Enkidu a high-five.

The Gunmen's only offensive capability appears to be its pachinko slots; when three identical numbers are lined up, the Gunmen releases a massive attack from its screen. After experiencing this powerful blast, Viral attempted to turn its power on Team Gurren. Unfortunately, by the time Simon lined up three of a kind (777, incidentally), Viral was so overcome with glee that he gave the pachinko Gunmen a high-five...and thus, took the full brunt of the resulting attack.

The Ashtanga Class (アシュタンガ級, Ashutanga Kyū?) are space-faring dreadnaughts that act as the flagships for the Anti-Spiral forces. Two of them were encountered by Team Dai-Gurren on the latter's journey towards Anti-Spiral Space. Ashtangas are bizarre mecha, even by the series standards; resembling nothing so much as large, fat worms made of multiple stone faces and black arms.

They are titanically powerful battleships, able to form a powerful energy barrier that not even the Arc-Gurren Lagann could pierce with its drill. The hands and arms surrounding the faces are not just a decoration, either; all can extend from the Ashtanga, and throw anything within reaching distance. They can also attack with a massive beam (dubbed the "Ashtanga Cannon" by fans), similar to Cathedral Terra's Helix Cannon. They can also fire missiles that negate the probability of any barrier being effective. Despite their power, they were easily destroyed by Super Galaxy Gurren Lagann.

The Ashtangas' design were created by manga artist, Hirohiko Araki.

These space-faring machines that emerge from the Ashtanga come in three shapes: the foot-like Pada Class (パダ級, Pada Kyū?), the hand-shaped Hastagry Class (ハスタグライ級, Hasutagurai Kyū?), and a rocket with a foresection that resembles a set of teeth. At first glance, they appear to be weaker than the Mugann, but were faking until their trap is about to spring, revealed to be much stronger than Team Dai-Gurren initially thought. After revealing their true power, they were able to destroy a number of Team Dai-Gurren's Gunmen and their pilots, while attempting to force the Super Galaxy Dai-Gurren deeper into the Galactic Spiral Abyss. However, the Space Twinboekun's massive explosion managed to take out the bulk of the armada, and the surviving Dai-Gunmen destroyed the rest.

Several of these are seen fighting against the Lazengann in Parallel Works 8, with some models that resemble the angels from Neon Genesis Evangelion. As the Anti-Spiral have already sealed themselves on their world, it can be assumed that these are autonomous robots controlled by the Anti-Spiral avatar. 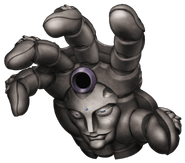