Created to combat in the Anti-Spiral war

At least 12 Meters (As large as Gurren Lagann)

The Lazengann is a tall, black mecha, with a tail used for attacks, a helmet adorned with a single horn, and a mouthplate on its chest armor. Its body has multiple holes in it from which drills can protrude. Notably, where Lazengann has one horn, Gurren Lagann has two (though it should be noted that Gurren Lagann's horns come from Enki's broken helmet).

The Lazengann is apparently a Gurren-Lagann-type mech, and as such has the same abilities that the Lagann can use. However, it is much stronger and can use more powerful drill techniques, as well as defend against the Gurren-Lagann's techniques with ease. Unlike the Gurren-Lagann's large, bulky Giga Drills, the Lazengann primarily uses long, slender drills that can change angles in mid-extension and can be used as whips.

Lazengann's spiral dashboard is also different from that of the Lagann's: the spiral is more jagged and composed of squares, compared to the smooth and more circular theme of the Lagann. Its spiral color is red, unlike the green of the Lagann, and the spiral gauge within the cockpit rotates counter-clockwise when filling, rather than clockwise.

Interestingly, the Lazengann is apparently in part powered by Lordgenome's sexual concubines imprisoned inside drills. This is probably to compensate for Lordgenome's lack of a second pilot to generate sufficient Spiral Power after a long period of non-use.

Role in the anime

Lordgenome used the Lazengann in a climatic battle against Simon and Rossiu in their Gurren-Lagann, overpowering the other mecha. Simon attempted to use the Lagann Impact attack on the Lazengann, but Lordgenome self-destructed the arm the Lagann attached itself to, preventing Simon from hijacking the Lazengann's systems. The Lazengann then fought the Lagann on its own, meeting the smaller mech's drill with its own Giga Drill attack, but was unable to overpower Simon and was destroyed in the process.

In the eighth Parallel Works video, it is revealed that as a child Lordgenome found a mecha very similar to Lagann. It is assumed that this mech eventually combined with another to form Lazengann, which would account for the similar energy readings to Gurren-Lagann that it emits during the battle of Teppelin.

In the same video, it is also shown that Lordgenome had his own equivalents of Arc-Gurren Lagann and Chouginga Gurren Lagann during the first Anti Spiral War, using the Dekabutsu and Cathedral Terra, respectively.

Lazengann Overload: A kamikaze move used to block the Anti-Spirals attack. Once the Lazengann is destroyed, the pilot becomes one with the energy, turning it into spiral power. The energy is then turned into the form of a drill, which can be absorbed by ally mechas.

Unnamed Giga Drill attack: Lazengann summons a massive amount of drills, then weaves them together to form a gargantuan drill larger than the Dekabutsu's head. Despite its size and strength, however, Simon (having just experienced a burst of determination and rage) was able to break the drill and damage Lazengann using only his Lagann.

Drill Bullets: Appearing only in the Otoko Series, this attack allows Lazengann to shoot bullet-shaped drill missiles. The bullets are powerful enough to temporarily down the Gurren Lagann, though it was able to get up a few seconds later. 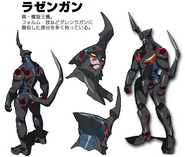 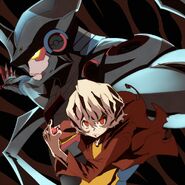 Lordgenome's Lagann as he found it as a young man

Lordgenome's Lagann forming itself during the final battle with the Granzeboma