Lagann is Simon's personal Gunman and one of the components of Gurren Lagann (Gunmen) along with Gurren.

Lagann is a Gunman found by Simon in the first episode while digging tunnels in his village. It received its name, Lagann (羅顔), meaning "enveloping face", from Kamina and draws power from the Core Drill, a small golden drill Simon uses similar to an ignition key. In Gurren Lagann Parallel Works episode 8, it's revealed that the first Laganns were found by Lordgenome as a child during the Anti-Spirals' initial assault on Earth long before the series' story begins and as such were used as a basis in the creation of all Gunmen that appear in the show to use against their enemies. However, after Lordgenome's betrayal he seemingly destroyed all of them except for the one that was placed deep underground until Simon finds it.

Lagann has an ability that lets it combine with other gunmen. This ability is displayed first when Lagann and Gurren combine to form Gurren Lagann, but also when Lagann combines with the Dai-Gunzan to form the Dai-Gurren. Lagann's combining ability appears to transfer to Gurren Lagann, as the combined mech was able to capture the Cathedral Terra, transforming it into the Super Galaxy Gurren Lagann. 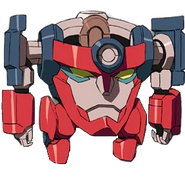 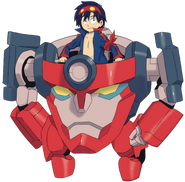