Grapearls are the successors of the Gunmen and were intended to be an upgraded version of Gurren Lagann. They are shown to be much weaker because they don't possess Spiral power. They are also completely ineffective against Anti-Spiral vessels. This changes when their weaponry is upgraded but even then they cannot hold a candle to the Gurren Lagann.

After the seven-year time skip, mass-produced mecha were developed through research of the Gurren Lagann. Considered to be more powerful than the Gunman, the Grapearls have an arsenal consisting of automatic handguns and blades and were adopted as the new mecha of the human army. The only two named pilots of the Grapearls (although there are many) are Gimmy and Darry, who each pilot a custom-model Grapearl to symbolize their status as commanding figures in the Grapearl squadron. Another grapearl pilot is a man by the name of Naakim, who was one of Yoko's students when he was younger. He is shown to be a grapearl pilot at the series epilogue. Though originally outmatched by the Anti-Spirals, two new weapons developed by Leeron's science team allowed the Grapearls to successfully deal with Mugann units without causing collateral damage.

The name Grapearl (グラパール) probably comes from the "Gurren-Lagann (Guren-Ragan)", in reference to the fact they were developed using research on the Gurren-Lagann, and pearl (written in Japanese as パール), in reference to the pearl-grey color of the standard Grapearls (though Gimmy's and Darry's Grapearls are custom models, colored in blue and pink, respectively). However, in the Japanese radio program Onsen Toppa Gurren Lagann, it's stated that the name comes from the phrase "Look at all the Gurren-Lagann!", said by a child at the end of the epilogue. 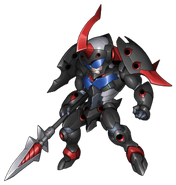 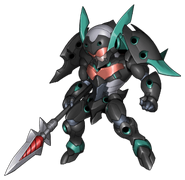