Granzeboma (グランゼボーマ, Guranzebōma) is a mecha piloted by the Anti-Spiral in the final battle against Team Dai-Gurren. It was created as a mirror to the newly formed Tengen Toppa Gurren Lagann; as per their goal of inflicting absolute despair, the Anti-Spiral intended to use it to fight their Spiral foes on even grounds, thereby making their defeat even more crushing.

Its basic appearance is similar to the Tengen Toppa Gurren Lagann, but it lacks faces on its limbs and has a dark-colored, skeletal design. Its most notable feature is an extra pair of arms located on its shoulders, which it uses in battle to try and overwhelm Team Dai-Gurren.

After manifesting the Granzeboma, the Anti-Spiral engages Tengen Toppa Gurren Lagann in a fierce battle. It initially holds the advantage, but its attempt to seize the Earth through a super-dimensional portal leads to the heroes regaining their spirit and returning the beating inflicted upon them. Infuriated by the Spirals' persistence, the Granzeboma performs its ultimate attack; Infinity Big Bang Storm.

The attack, intended to annihilate Team Dai-Gurren, backfires when Lordgenome uses the Lazengann to take the blast, converting it and himself into Spiral Power for the Tengen Toppa Gurren Lagann. With the massive boost, Tengen Toppa Gurren Lagann is able to match the Granzeboma blow for blow, with its pilots' determination fueling it to match the Anti-Spiral's full power. Ultimately, the Granzeboma is destroyed when Simon and Nia manage to pierce its pilot's body with the Lagann's drill via the Lagann Impact.

The second Gurren Lagann movie introduces the Super Granzeboma, an upgraded form of Granzeboma made to counter the Super Tengen Toppa Gurren Lagann. It appeared as a more humanoid version of the Granzeboma, lacking the shoulder arms and visible mouth on its stomach, and bore its base component between its massive horns in a similar fashion to how the Anti-Spiral homeworld was positioned on the Granzeboma's forehead. Despite being as large as its foe and even possessing an Anti-Spiral version of the Giga Drill Break which it used to defeat the latter, the Super Granzeboma was still destroyed when Simon landed on the Anti-Spiral homeworld and slew the Anti-Spiral in personal combat.

Laser Barrage: The Granzeboma briefly displays the ability to rapidly fire red energy bolts from its eyes, mouths, fingers, and the glowing white spots on its body.

Galaxy Shuriken: Using its larger shoulder arms, the Granzeboma can toss Super Spiral galaxies with enough force and speed to have them act as bladed projectiles. In Lagann-Hen, these mega galactic-scale shuriken can damage even a Tengen Toppa Gunmen.

Melee Combat: Despite its size, the Granzeboma can move with great speed and agility. It combines this with its extra set of arms to deliver rapid attacks from multiple angles.

Infinity Big Bang Storm: The Granzeboma's ultimate attack sees the mecha grabbing two Super Spiral galaxies with its large shoulder arms, squeezing them together into a ball (combined with its own power). The Granzeboma then throws the condensed ball of energy as a wave attack shooting an everlasting Big Bang-like energy projection at the opposing mecha, with endless series of Super Spiral galaxies literally flying from the point of impact. It is stated to have the power on par with the creation of the entire universe (or simply the entire possible existence).

Anti-Spiral Drills: Although the Granzeboma is an Anti-Spiral creation, it can still create drills - however, they have largely straight lines going from base to tip, making them more like spinning lances. The Granzeboma displayed two forms of drills: large Giga Drill-like weapons on its hands and narrow, tentacle-like drills released from its mouth and the Anti-Spiral homeworld on its head. 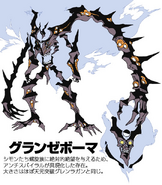 Granzeboma, as seen from Earth.