The death of Thymilph has brought about the concern of the Spiral King (Lord Genome). Adiane the Elegant declares that she will go defeat Team Dai-Gurren. Meanwhile the Great Gurren Brigade managed to take control of the enemy fortress, but are still mourning Kamina's death. Rossiu practices using a Gunmen when Dai-Gurren shuts down due to engine failure. Kittan confronts Simon, and blames him for Kamina's death. This causes Simon to lash out at Rossiu, apologizing soon after.

Elsewhere, Yoko speaks to Dayakka and hides the fact that she is sad. While stopping a counter attack, Lagann detaches from Gurren and flies into a ravine. Simon tries to reactivate but it doesn't. Simon is then shocked to see a Gunmen toss what looks like a coffin over the edge. He manages to open it only to discover a young human girl named Nia. Nia is shocked to see another human and talks to Simon before a Gunmen attacks. Simon decides to stay behind and let Nia escape but Kittan arrives and saves them. Nia is briefly questioned by the members of Team Dai-Gurren about where she is from but she is unable to tell them.

At that moment, Adiane attacks and the Gunmen prepare to head out. Recognizing the voice, Nia runs out and reveals her self to everyone as the Spiral King's daughter.

Nia in the Opening 2 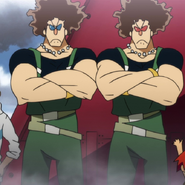