You're Gonna Do It!!

Following their ordeal at the hot springs, Viral appears before the Gurren Brigade to challenge Kamina. In the midst of their fight, more details of the Beastman Empire are revealed. Suddenly, Viral's backup arrives, in the form of one of the Four Divine Generals-Thymilph the Crasher-piloting a massive mobile Gunmen fortress, the Dai-Gunzan. Leeron quickly realizes that this Ganmen is the return point that they’ve been looking for, and Kamina’s ready to take it on despite everyone else thinking that they should run away. Thymilph proceeds to shell the Gurren Lagann from point blank range. Despite Yoko’s pleas to run away, Kamina doesn’t give up.

Even when the Gurren Lagann’s left leg gets damaged, Kamina still refuses to back down, and his determination powers up the Gurren Lagann to self-repair. Since he can’t reach the top of the Dai-Gunzan by itself, Kamina uses the explosions from the enemy fire to propel the Gurren Lagann upward until he can make a flaming kick at the Enki on the Dai-Gunzan’s surface. The others, who were watching the battle from a distance, now get involved in the fight because the Dai-Gunzan launches three Ganmen at them. Fortunately, they are saved by the appearance of a new Ganmen who lands on one Ganmen and gets the other two to destroy themselves. This new Ganmen turns out to be piloted by none other than Kittan, the brother of Kiyoh, Kinon, and Kiyal. While this is going on, Kamina confronts Thymilph, the commander of the Dai-Gunzan and one of the four generals under the Spiral King. Kamina introduces himself and the jumps up towards Thymilph, but Thymilph has the Dai-Gunzan grab the Gurren Lagann with its large arms and smack it around. It then takes the Gurren Lagann and attempts to pull its legs apart. Luckily, Kamina and Simon are saved by weapons fire from another friendly Ganmen, this one piloted by Dayakka. It seems that everyone has been following Kamina’s example and have been stealing their own Ganmen.

When Thymilph decides to turn his attention to taking care of the Gurren Lagann first, Yoko calls Kamina to make him understand that he’s integral in keeping everyone together. Kamina still refuses to run away, and the Gurren Lagann soon gets knocked off the Dai-Gunzan. Things finally turn around when Kamina says that they can’t win as long as the Dai-Gunzan’s legs keep moving. This gives Simon an idea, so he has Kamina give him control of the Gurren Lagann. Simon proceeds to use the Gurren Lagann’s speed to avoid the enemy shells and then shoots drills around the Dai-Gunzan. With a ring of these drills surrounding the huge Ganmen, Simon only has to attack into the ground to crumble the earth under the Dai-Gunzan. Viral promises to be back tomorrow, but for now, the Gurren Lagann has won thanks to Simon. That night, Kamina’s group sets up camp with their small army of new allies, each with their own Ganmen. While Leeron gets to work on the Gurren because the leg damage returned as soon as it separated with the Lagann, Dayakka explains that the Gurren Lagann is a symbol of hope for mankind now.

After Kamina gives a fiery speech to his new allies to get them excited for the impending fight tomorrow, Leeron explains that the Gurren-Lagann’s combination completes when Lagann takes control of Gurren’s system. Using this same logic, they could try to capture the Dai-Gunzan by combining the Lagann with it, though it will depend on Simon’s fighting spirit. Yoko meanwhile goes out to see Kamina who is admiring the moon in the clear sky. He feels that they have to keep fighting and win for the sake of kids like Simon living without worries. Yoko respects Kamina for saying this, but she also warns him not to repeat the reckless things he did today. He would have died today if it weren't for Simon, and that made Yoko really scared. After a long pause, Yoko seems ready to say something else to him, but they get interrupted when a distant mountain erupts in flames. 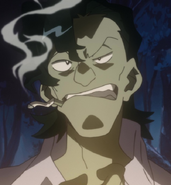 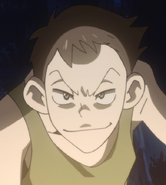 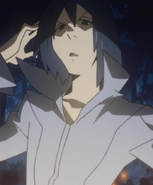 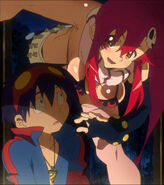 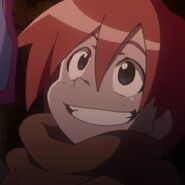 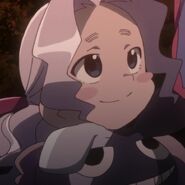