Let's Go, This is the Final Battle is the 23rd episode of the Gurren Lagann anime. It first aired on September 2nd 2007.

It has been one week since the moon was stopped from falling, and Simon is telling the others that Viral will be attending their strategy meetings from now on. Viral doesn’t expect them to forget the past, but he does want them to understand that it’s not only humans who want to protect this world. When Simon wonders where Rossiu is, Leeron explains that Rossiu is working on a reconstruction plan for the planet’s surface. Leeron then starts up a presentation and goes over how the Cathedral Terra had been disguised as the moon, how their spiral power is from their fighting spirit, and how the Anti-Spirals were spiral life-forms who believed that continued use of the spiral power would destroy the universe. The Anti-Spirals hid their home base in a different dimensional axis, and after they won, they created the spiral life-form eradication system for the Spirals’ mother planet. The Spirals were thus forced to live underground. As for the Beastmen, Viral explains that they were all created by Lord Genome and that breeding was done through cloning. Leeron then starts talking about genetic diversity through sexual reproduction, but when he notices everyone losing interest, he summarizes it up by saying that love changes the universe. And with an exploration system being constructed on the Cathedral Terra, Simon intends to find the Anti-Spiral home base no matter what. Viral tells Simon afterwards that he thinks he understands what their strength is, but Simon feels that they’ll become stronger yet. Rossiu meanwhile returns to his old underground village of Adai and when he runs into the priest, he gives back the sacred book. He wasn't able to read it after all because he couldn't identify the ancient writing and suggests that someone might have created it as a joke. The two then start laughing about how the book was nonsense, and Rossiu wonders if it’s evolution that they thought this was a treasure and now understand that it’s junk. The priest feels that this is the reason that people are interesting, but Rossiu replies that he doesn’t think that way. Back at base, Simon runs into Kinon who informs him that she got a mail from Rossiu with the reconstruction plan, but there was also a message to her on the last page. In it, Rossiu had wanted her to work with the people around her and had thanked her for her friendship. All this has Kinon worried, particularly given how Rossiu has been brooding over something since they returned to the planet from space. She also feels that Rossiu didn't drive Simon from his position for personal greed and remembers how he had cried after Simon’s trial. Kinon then recalls that Rossiu always talked about his original village, so she and Simon head to Adai on the Gurren Lagann.

By now, Rossiu has started going further into the village under the pretense that he’s going to investigate if the moon getting closer had loosened the ground. As he walks, he thinks about how living required sacrifices because only 50 people could live in the old village. He had believed that the planet’s surface was where everyone could live, but he now feels that this was a mistake. Because of how he had tried to sacrifice a lot of lives, Rossiu feels that he has to bear the crime. Up in space, the Cathedral Terra’s spiral systems suddenly start up and Lord Genome’s head detects a high-speed spiral metastasis reaction coming from Simon and Kinon in the Gurren Lagann. When Rossiu points a gun at his head, the image of him pops up in their cockpit, and the Gurren Lagann fires a spiral beam into the air in front of it, opening up a portal that lets it travel directly to him. Simon jumps out as soon as the Gurren Lagann crashes onto the ground, and he heads straight for Rossiu to punch him right in the face. After admitting that someone hit him like this in his past, Simon goes on to say that everyone makes mistakes. Getting hit by someone for screwing up is fine, but there’s no need to enact punishment on yourself.

Simon knows that Rossiu might feel that this is a mistake he can’t start anew on, but he thinks that struggling with it will eventually let Rossiu move forward a little. In the end, Simon feels that it’s all okay because Rossiu tried to do what Simon himself couldn’t do, and he offers his hand, saying that he needs Rossiu. Once he helps Rossiu stand back up, Simon corrects himself and admits that there’s someone who needs Rossiu more than him - Kinon. She runs crying into Rossiu’s arms, and after he apologizes, they board the Gurren Lagann and blast their way back above ground. Riding on Rossiu’s lap, Kinon asks him if she’s heavy, and although he says that she is, it’s fine because he wants to feel what kind of thing the weight of one person is. It is sometime later that the entire group finds itself gathered behind a hologram of Lord Genome as the head goes through a complicated explanation about dimensions and finding the Anti-Spiral homeworld that even Leeron isn’t sure about. The key is Nia’s ring, and after another complex explanation, they conclude that with fighting spirit, they can warp to their destination. However, Simon worries about if it’s okay for the Gurren Lagann to leave the planet if their enemy can warp too. To his surprise, Rossiu urges him to go and says that he’ll manage while they’re gone.

With the operation green-lighted, the group first uses the Cathedral Terra pierce into imaginary space with its dimensional anchors so that it can pull out the real moon that had been hidden. Simon is meanwhile back on the planet saying his goodbyes to Rossiu when Old Coco suddenly appears with a huge Dai-Gurren-dan flag. Unfurling it with the Gurren Lagann, Simon and Viral fly it all the way into space and plant it onto the Cathedral Terra. With his new outfit, Simon then boards the bridge and orders the launch of the ship that he has renamed the Chouginga Dai-Gurren (Super Galactic Great Gurren). After identifying everyone standing there with him, Simon declares that if they’re united as the Dai-Gurren-dan, then they have nothing to fear. And with that, the engines start, and Simon sends them on their way to what he calls their final battle. 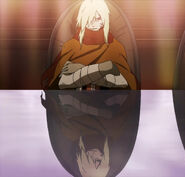 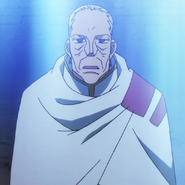 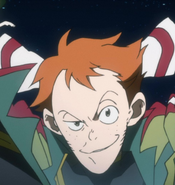 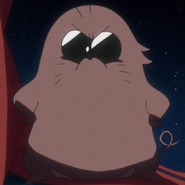