How Far Will God Test Us?

How Far Will God Test Us? is the 20th episode of the Gurren Lagann anime. It first aired on August 11th 2007.

With Simon locked in a nearby cell, Viral is amused that the hero of humanity’s liberation and the traitorous beastman would be equally imprisoned. Simon, however, is more concerned with how there’s only two weeks left until the moon crashes down onto the planet. Meanwhile, Rossiu is getting a report from Kinon and Gimbley about the progress of the evacuations and from Leeron about how the moon is slowly dropping. Leeron then requests to see Rossiu and claims to have something to say to him. Back at the prison, the various inmates are deriding and mocking Simon for what’s going on with the moon, and one beastman in particular attacks him in the locker room. This bird beastman has a grudge against Simon for defeating Cytomander, which led to him being stuck here and losing his wings, and he blames Simon for it. Simon manages to avoid the first few swings, but when the beastman trips him and is about to kill him, Viral steps in. After kicking the bird into the wall, Viral questions if the Simon who has lost Gurren Lagann, his woman, and his comrades, and who he feels has been reduced to being just a naked monkey, can’t even defend himself.

After being challenged to fight, Simon tries to punch Viral, but Viral sidesteps and counters with his own lunge. Simon manages to jump over this, and a crowd soon gathers around as the bird tries to re-enter the fight. His claw punctures through Viral’s hand, but Viral kicks him into the wall again and instantly heals the wound. Explaining that he got an immortal life from Lord Genome, Viral starts fighting Simon again and has a real problem with Simon saying that he’s only doing what he has to do. It makes Viral question if doing nothing is what Simon has to do, and he compares Simon to Lord Genome. When the bird beastman tries to jump in once again, he gets caught in the middle of both Viral and Simon’s punches, but the two are soon broken up by the arrival of the guards, who then put them in separate cells.

Leeron shows Rossiu a simulation that makes him question humanity's decision to live on the surface. Meanwhile, on the Arc-Gurren, Kittan tries to make small talk with Kinon and notices several animals being taken aboard. Lordgenome's head is hooked up to Arc-Gurren's Spiral Engine, which is successfully activated. Kittan encounters Guinble in the hallway, shoves him against the wall, and asks him why animals are being evacuated from Earth. Rossiu arrives and tells Kittan that Arc-Gurren will remain in space for one year. Kittan is then shown the same simulation Rossiu saw earlier, and discovers that the surface and the underground shelters will be destroyed by the moon 's impact. The Earth's atmosphere will be filled with hot gases and the planet will become unable to support life for one year, which is why Arc-Gurren will remain in space until Earth cools down. Kittan gets mad at Rossiu for planning to let so many people die and suggests that they instead use Arc-Gurren to destroy the moon. Rossiu says failing to do so would ensure humanity's extinction, and states his intention to save as many lives as possible. He goes on to say that a leader has to make difficult decisions. Kittan agrees, but still doesn't like Rossiu's plan.

Kittan visits his niece Anne at the hospital, and Dayakka later reveals that resigned from his government job so he can spend more time with his family. The Mugann appear in Kamina City and attack Parliament Tower in an attempt to destroy Arc-Gurren's Spiral Engine.

The Grapearls begin their counterattack and Kittan stays behind to attack the Mugann with a rifle that has Spiral Shells. The Mugann fires a beam at Kittan, but Makken appears in his Mo-Shogun and blocks it. Leyte arrives with Team Dai-Gurren's Gunmen, which were not scrapped and instead equipped with Spiral Weapons. Arc-Gurren emerges from underground with a Spiral Shield to protect it from the Mugann. Lordgenome tells Rossiu that the shield can only remain active for thirty minutes so the Spiral Engine will have enough power for Arc-Gurren to leave Earth. Rossiu orders the Grapearls to take as many evacuees as possible on board. Kittan shows up and says Rossiu is doing what a leader should do. He then asks Rossiu to give him the Core Drill, which he does. Kittan gets inside King Kittan and flies off to return the Core Drill to Simon. Arc-Gurren takes off after the thirty minute time limit is up, leaving several citizens behind.

At Lincarne Prison, Viral laments the manner in which he will observe Simon's death while Simon says he is okay with dying as long as the people remain safe. Nia appears and shows Simon and Viral that no life form on Earth will survive when the moon falls, claiming that Rossiu has turned his back on humanity. Once again, Nia tells Simon the Anti-Spirals want humans to experience absolute despair. At that moment, a warning shot is fired at Nia by an old friend: Yoko. 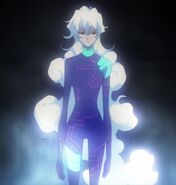