You Don't Know Anything! is the 17th episode of the Gurren Lagann anime. It first aired on July 22nd 2007.

Seven years have passed since the capture of Teppelin and a new capital city named Kamina City has been built from the remnants of the royal capital.

The episode begins with a monologue from Rossiu, who ponders what Lagann, the Core Drill, and Spiral Power really are, as well as why Lordgenome sealed away the human race underground. Rossiu reveals that Old Coco was discovered to be a Beastman, and believes that such a trivial mystery was only solved because of the recent peace. As Rossiu conludes his monologue by mentioning Lordgenome's dying words, the number on a mysterious counter in an unknown location increases.

Simon is seen in his office signing several documents when Rossiu gives him another stack, much to Simon's dismay. Nia enters the office with lunch for Simon. She offers to make a lunch for Rossiu too, but he refuses due to the trouble it caused him before. Rossiu tells Simon there will be a council meeting in 15 minutes.

At the start of the council meeting, Leeron, Chief of the Science Bureau, contacts Simon and Rossiu, informing them that the Moon Probe Gun Rocket has been launched and will reach the moon in one day. It is then revealed that the council is composed of Kittan, Dayakka, Iraak, Kidd, Zorthy, Jorgun and Balinbow. Simon recalls Lordgenome's last words and Dayakka is amazed at humanity's increased knowledge about the moon. Rossiu asks Jorgun how the census is proceeding to date, but he is unable to answer. Zorthy thinks Jorgun and Balinbow are not fit for the job, causing Rossiu to lash out at everyone for their laziness. Simon gives Rossiu permission to give orders to the Citizen Affairs Bureau and assures Jorgun and Balinbow that their statuses won't change as a result.

After the meeting, the council members go to the Pig Mole Steakhouse, where Jorgun and Balinbow, angry at Rossiu for his outburst, eat several pig mole steaks at once. The chief of Jeeha Village is shown to be the owner of the steakhouse and has become very wealthy, sporting a white suit, a gold fan, and several pieces of gold jewelry. Kittan notices that Dayakka looks bummed out and tells him not to worry about the Spiral King's final words. Zorthy reminds Kittan that Dayakka's child will be born soon.

Nia goes to Dayakka's house to tell Kiyoh (who married Dayakka during the timeskip and is now pregnant) and Kiyal that Simon has proposed to her. However, she turned him down because she misunderstood Simon's words. Kiyoh tells Nia that the meaning of the words are not inportant. Rather, Nia should respond based on how the words make her feel. Kiyoh gives Nia the phone to talk to Simon. Meanwhile, Simon is looking the Kamina Statue and has a flashback of Yoko's departure from Kamina City. In the present, Simon gets a phone call from Nia, who agrees to marry him and loves the ring he gave her, much to his joy. Rossiu finds Simon and tells him that Viral is causing trouble and is battling the Grapearl Squadron. Simon offers to battle him in Gurren Lagann, but Rossiu refuses to let him go.

Gimmy and Darry, the commanders of the Grapearl Squadron, defeat Viral and his Enkidudu and arrest him. Simon contacts Viral via holo message and ask him what he was doing. Viral says he was merely protecting humans who wanted to live underground and that said humans were being taken to the surface against their will. For this reason, he believes Simon to be imitating Lordgenome. Rossiu tells Viral to stop justifying his actions and that his fate will be decided at his trial. After ordering Gimmy to take Viral away, Rossiu ends the holo message. Simon asks Rossiu why he was taking humans above ground, and Rossiu answers by saying it was necessary in order to conduct an accurate census. As Rossiu walks away, Simon questions him on what he'll do to the millionth human, stating that sending said human off-planet would be no better than what Adai Village did in the past. Rossiu quietly says Simon doesn't know anything.

Rossiu enters a laboratory and is greeted by Kinon and Guinble Kite, the latter of which informs him of the Spiral Power Research Institute's successful activation of the Biocomputer. Kinon congragulates Rossiu on getting close to achieving his dream of learning the world's secrets. Guinble states Simon, the council, and the citizens of Kamina City have become complacent and weak and Rossiu is the only one keeping the government running. Rossiu corrects him, stating Guinble and the rest of the younger generation have helped him run the government. Kinon, Guinble, and the scientists then salute Rossiu as a sign of respect.

That night, Simon is seen looking out at the city from his office window when Boota emerges from his clothes, reminding him that the tiny pig mole is the one thing that has remained the same over the last seven years. Simon gets a phone call from Nia at the hospital, who tells him Kiyoh has had her baby, a girl named Anne. At that moment, the counter from before reaches 1,000,000, meaning Anne is the millionth human to appear on the surface. A portal opens in the sky and a strange mecha emerges from it and starts firing energy beams at buildings. Simon ends his conversation with Nia, leaving her confused. Suddenly, red circuit lines appear on Nia's body as she screams in fear. The counter that was keeping track of the human population is then shown to be inside the moon. Kiyal walks outside to find Nia missing and her cell phone lying on the ground.

Rossiu is surprised that the mecha's approach wasn't detected, to which Cybela Coutaud responds that it appeared from a hole in the sky. The Grapearl Squadron is dispatched to fight the mecha, which Darry notes to be faceless. As Cybela begins a model analysis of the mech, the Grapearls shoot it with handguns, only for the bullets to be blocked by a barrier. Gimmy tries to attack the mecha with the Grapearl Blade, but it is also blocked by the barrier. The mecha fires its beam at Gimmy, but he dodges it and another Grapearl is hit instead. Rossiu is shocked that the Grapearls' weapons are ineffective against the mecha, while Kittan, Jorgun, and Balinbow enter the laboratory. The Grapearls are destroyed one by one until Darry and Gimmy are the only ones left. Kittan, Jorgun, and Balinbow believe they can defeat the mecha with their Gunmen, but Guinble tells them Gunmen were relics of the Spiral King and therefore disposed of. Kinon says the Grapearls are mass-produced combat mechs based on Gurren Lagann research. She goes on to say that if the Grapearls cannot defeat the mecha, their Gunmen do not stand a chance against it. Kittan notes that Kinon's personality is the opposite of what it was before. Gimmy and Darry manage to evade the mecha's beams until one of them heads straight for Darry. However, the beam is blocked by a drill from Gurren Lagann, which Simon is piloting.

Kittan is relived to see Simon, while Rossiu reminds him that it is not his job to go into combat. Simon counters by saying their top priority is to ensure the safety of Kamina City and its citizens and asks if the seven years of peace have made Rossiu soft. Simon says that Gurren Lagann's cockpit is the one place where he can be himself. As Simon attacks the mecha with the Giga Drill Break, Rossiu wonders why Simon keeps taking the easy way out before asking Cybela if the model analysis is complete. Cybela replies that no matches were found in the Team Dai-Gurren, Lordgenome Army, or New Government databases. Rossiu tells Simon to try to identify the mecha and capture it if possible, but Simon tells Rossiu to stop bugging him and that he does not have time to follow instructions. Darry and Gimmy notice that Simon's drill is building up energy and Simon proceeds to shove the mecha's beam down its "throat" using the drill. The mecha explodes into several colored shapes which detonate upon coming into contact with the surrounding buildings, much to everyone's shock.

Rossiu orders the fire and rescue crews to keep the fire under control. Kittan wonders what just happened, to which Rossiu replies that despite not knowing what the mecha was, Simon blindly counterattacked and destroyed it, claiming that the word "rash" does not begin to describe Simon's actions. A hologram of Nia appears in the sky and on all the screens in the city. Nia announces that the Anti-Spirals have determined that humanity has achieved Spiral Power Danger Level Two and is a menace to the universe. Therefore, the Anti-Spirals will now activate the Humanity Extermination System.

Beginning with this episode, Bridget Hoffman takes the role of Nia in the English Dub. Due to personal problems at the time, Hynden Walch was unable to continue her role. 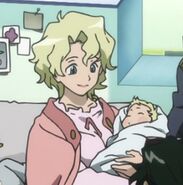 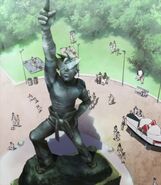 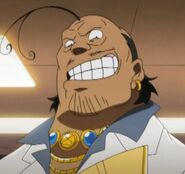 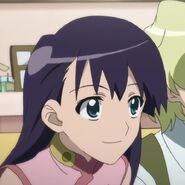 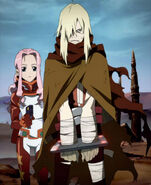 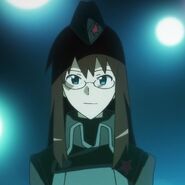