During the Invasion of Teppelin, Viral's Gunmen is remodeled into the Enkidudu (エンキドゥドゥ, Enkidudu), replacing the sickle crest for an extra pair of arms, meaning the Gunmen can now fight with four blades. When the new form fights the Gurren-Lagann, however, it is swiftly defeated, despite its upgrade. After the timeskip, the Enkidudu is shown fighting the Grapearl unit, in order to protect a group of humans who decided to continue living underground. However, the damaged Enkidudu is unable to hold its own against the advanced Grapearls and is ultimately defeated, shutting down as Viral thanked his mecha for lasting this long for his grudge. The fate of the Enkidudu is never known. 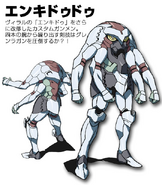