Later, the helmet-less Enki has been redeployed as the upgraded Enkidu (エンキドゥ, Enkidu) and sports a new sickle-like weapon, which is affixed to its head (a homage to Ultraseven 's Eye Slugger weapon). When wielded, it provides an alternative to the dual swords the Enki usually resorts to in melee combat. Furthermore, it is also capable of shelling from afar by physically launching munitions from the same point on its head, once the sickle has been removed. When it is aided by Cytomander's air raid on the Dai-Gurren, it was also equipped with a flight engine, allowing it to fly. 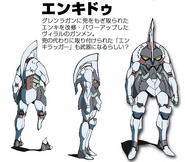