Enki (エンキ, Enki) is Viral's personal Gunman, modeled after an armored samurai. The Enki is the product of significant innovation in Gunmen technology, and sports a number of advances that eclipse lesser models in performance, and is the first model seen to support solid-based ammunition. Unlike stout Gunmen, such as the Gurren, that have bulky limbs that can only be used in wide swings, the Enki is more segmented and has multiple joints that allow it to perform complex actions, such as throws, kicks, and various martial arts techniques. The Enki's arm and thigh plates conceal rows of hidden gun turrets that fire large steel projectiles (kunai). There are pop-up compartments in the shoulders that can fire a single volley of rockets, and the entire chest plate can open to reveal a number of launchers that deliver an explosive payload of missiles. The Enki possesses a wrist mounted concave blast-shield, and a helmet with a large black ring atop of it which is actually the charging focus for a medium-range particle beam cannon (Called the Enki Sun Attack in the video game Super Robot Wars Z2 Hakai Hen). Its helmet becomes the possession of Simon and Kamina, as they broke it off and stole it when they first combined to make the Gurren-Lagann, after which the latter mech integrates it as a permanent addition to its armor. 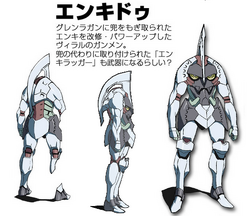 Later, the helmet-less Enki has been redeployed as the upgraded Enkidu (エンキドゥ, Enkidu) and sports a new sickle-like weapon, which is affixed to its head (a homage to Ultraseven 's Eye Slugger weapon). When wielded, it provides an alternative to the dual swords the Enki usually resorts to in melee combat. Furthermore, it is also capable of shelling from afar by physically launching munitions from the same point on its head, once the sickle has been removed. When it is aided by Cytomander's air raid on the Dai-Gurren, it was also equipped with a flight engine, allowing it to fly.

The Dai-Gunzan-Du {ダイガンザンドゥ Daiganzandu) appears only in the first film adaptation of the series, Gurren Lagann The Movie: Childhood's End. Viral is the commander of this Dai-Gun, to make up for the loss of Dai-Gunzan and Thymilph. Following the pattern with Viral's mechas, it has an extra set of arms like Enkidudu, has the crest of Enkidu, and follows the color scheme of Enki. Dai-Gunzan-Du shares all its abilities of the Dai-Gunzan and can be used as a substitute for the Dai-Gunzan in the Do-Ten-Kai-Zan. 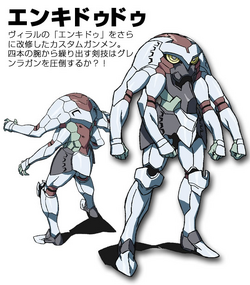 During the Invasion of Teppelin, Viral's Gunmen is remodeled into the Enkidudu (エンキドゥドゥ, Enkidudu), replacing the sickle crest for an extra pair of arms, meaning the Gunmen can now fight with four blades. When the new form fights the Gurren-Lagann, however, it is swiftly defeated, despite its upgrade. After the timeskip, the Enkidudu is shown fighting the Grapearl unit, in order to protect a group of humans who decided to continue living underground. However, the damaged Enkidudu is unable to hold its own against the advanced Grapearls and is ultimately defeated, shutting down as Viral thanked his mecha for lasting this long for his grudge. The fate of the Enkidudu is never known.

Viral is given his own Tengen Toppa Gunmen during the movie adaption of the final battle with The Anti-Spiral. It sports seven sets of hands, each of which can wield a weapon. It uses twelve blackened blades along with a single kanabō to protect Nia from the Granzeboma, and is later used along with the rest of Team Dai-Gurren's mechs to form the Super Tengen Toppa Gurren Lagann.

All forms are based on figures in Sumerian myth: Enki was a god of wisdom. Enkidu, meanwhile, was the wild man who fought and befriended King Gilgamesh during the Sumerian epic. The latter seems to bear significance to Viral's role in later episodes. It is possible that the mecha's name is a reference to French comic author Enki Bilal as Viral can also be read "Bilal" in Japanese. This is further evidenced by the title of Viral's theme, "Nikopol", which is the name of one of Enki Bilal's most famous work, the Nikopol Trilogy. 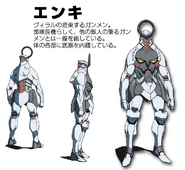 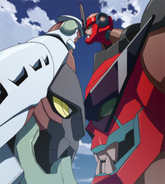 Enki and Gurren Lagann headbutt each other