The most gar background character to appear in any anime series ever, Bruce Ironstaunch appeared in Tengen Toppa Gurren Lagann twice. Once, when he was seen making a rude gesture in the middle of a cheering crowd, and once more when he threw a stone that split open the freakishly wide forehead of Rossiu (jerk extraordinaire).

Bruce has since gone down in history as one of the most manly men of anime.

Dude, Bruce Ironstaunch is so freaking badass. Did you see how he threw that rock? 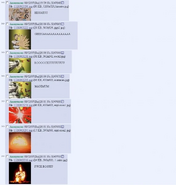